A particular idea, which raised $20 million in funding to create a product that was never released on the market: today i want to tell you about DigiScents and its iSmell.

The concept behind the project by Joel Lloyd Bellenson and Dexster Smith was, no doubt about it, fun: to recreate smells and perfumes through a device connected to the PC. Let’s go back to 1999 when, during a holiday in Miami, the two partners, amazed at the variety of perfumes, scents and essences that could be perceived on the beaches, began thinking of a way to store and reproduce these olfactory experiences in different contexts.

We’re not talking about two naive. Joel and Dexster, in fact, had already founded Pangea Systems, a company that specializes in IT service management for the pharmaceutical market: they definitely had an idea of how to make a business.

Let’s try to understand what was supposed to be their iSmell. Bellenson and Smith first worked creating a sort of “database of smells,” which would collect a certain number of smells, and then producing a device to connect to the PC, which would react to impulses from digital files loaded on web pages or emails, releasing the most suitable fragrance to what you were viewing on the PC.

The idea was probably considered very good, as DigiScents managed to raise $20 million investment by major investors such as Givaudan, the largest company in the field of essences and perfumes, Real Networks, a provider of streaming services, and a leader in the field of consumer goods such as P&G.

After working for two years in 2001 a prototype for iSmell was introduced at the Consumer Electronics Show in Las Vegas, but failed to get the public’s interest.

What went wrong then? Let’s think about it: a potentially good idea and significant investments; what is missing? Again, as we saw  in other cases that I have  told you about, the missing link was a market survey.

ISmell, in fact, was definitely a nice idea, but not a useful one. It did not meet any need from the public and could not create one. Smelling the aromas in that gorgeous kitchen of the film we are watching could be a plus point while watching, but it’s definitely something that we could easily do without.

With lo-fi prototypes and trying to think of possible usage scenarios, Bellenson and Smith would have understood that the public was not asking for, nor felt the need to have a product like iSmell. Some research on the Internet, in addition, would immediately signal out how similar attempts were far from successful.

In the late fifties and early sixties, in fact, during the screening of some films, such as the famous case of Scent of Mystery, cinemas rooms were sprayed with perfumes to implement the visual experience with that smell. The attempts failed because you got the opposite effect: the audience was even bothered by it.

ISmell, therefore, concluded his short life, and with it also the company created specifically for that purpose, in 2001, having burned all investments collected and having received the skepticism of the general public.

And our two characters? After the unfortunate experience with DigiScents, they started a new adventure at Upstream Biosciences Inc., a company that deals with the development of tests to obtain an early diagnosis in cancer diseases. A return, in short, to the reality in which they had worked before the project iSmell. 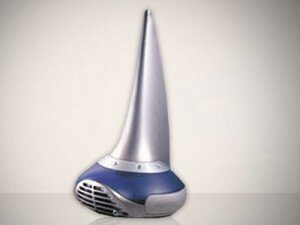 “It ‘s been a harrowing experience– says Bellenson – because we worked hard on that project”. It also seems that the idea has not been abandoned altogether, in fact maybe it will be re-launched “when the time is right”, as one of the DigiScents founders reiterated.

But are we really so sure that sooner or later the right time will come? Who knows, what is certain, meanwhile, is that this idea continues to live in many other projects. Scentcom for example, is an American start-up founded in 2007, which focuses on the implementation of sensory experiences in various fields (games, tv, cars, cell phones) through the use of perfumes, and therefore smell. In March 2013, however, a group of Japanese researchers unveiled a prototype for a “smelling screen“: a screen that emits scents. Recent is also the case of Amos Porat, CTO of scent2you , Israeli company that is developing different prototypes with the goal of controlling the scents through applications that can be used in a large number of devices.

It seems, then, that transmitting smells and perfumes, as we do with video and music, is one of those ideas that will never be abandoned. And who knows if some start-up will succeed sooner or later, thanks to ever-improving technologies, making inroads into the hearts of the audience and become a company, or if it will be doomed to remain an eternal misunderstanding.